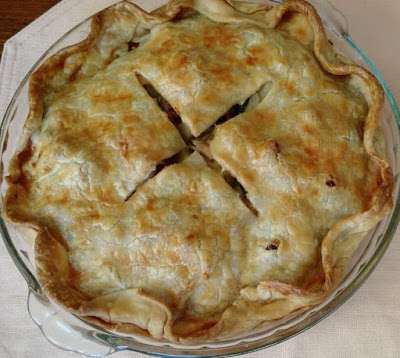 INGREDIENTS
4-5 cups of chicken pot pie filling
1 box of refrigerated pie crusts
egg wash (1 beaten egg)
INSTRUCTIONS
Preheat the oven to 400 degrees.
If you haven’t already, make chicken pot pie filling, and let cool. This takes about 30 minutes if you have cooked chicken.
Press the bottom pie crust in a 9 inch pie pan. Pour in the filling.
Cover with the top crust, and seal the edges.
Brush the top crust with the egg wash.
Cut several slits in the top crust to let steam escape.
Cover the edges of the pie with a foil shield. Bake for 15 minutes.
Remove the foil shield, and bake for an additional 30 minutes.
Let cool for at least 10 minutes, and then serve.
INGREDIENT DISCUSSION
Chicken pot pie filling: Fully cooked and seasoned chicken and vegetables. See here for more details.
Refrigerated pie crusts: Any flaky pastry works. See below for discussion on pie crusts and other pastries.
Egg: Brushing the top of baked goods with egg increases shine. See here for a side by side comparison (cream on left, egg on right). Alternatives include milk and/or sugar, which help browning.
Pie Crusts
You can use 1 or 2 pie crusts. For pie crust recipes, 1 cup of flour is roughly 1 pie crust. Fortunately, since pie crust contains so much butter, messing up a recipe results in a more crumbly, but still tasty pie.
I chose recipes which use the fewest number of ingredients, and I do not include any recipes that use shortening because I never have shortening. Sugar and salt can be omitted for a less flavorful pie crust.
Refrigerated pie crusts: Easiest, most convenient option, but slightly less tasty. Each box contains 2 individually wrapped pie crusts. Simply follow the instructions on the box, bring to room temperature, and roll out to use.
Homemade butter pie crust: For the most buttery, flakiest pie crust, I use this recipe from SeriousEats. If you do not have a food processor, you can try this recipe from SmittenKitchen. Forks work okay in place of pastry blenders.
Coconut oil pie crust: For a vegan, flaky pie crust, you can use solid coconut oil.
Slightly better for you (healthy?) pie crust: Pie crust consists of simple carbs and fat, so it’s not really healthy even with modifications. For whole wheat pie crust, you can substitute up to half of the flour for whole wheat flour. For lower fat pie crust, you can substitute up to half of the fat with milk.
Oil pie crust: For an easy vegan pie crust, you can use plain vegetable oil. When I last made oil pie crust, I couldn’t roll out the dough, so I plopped it on top of the pie instead.
Melted butter pie crust: Instead of dealing with solid butter, you can make melted butter pie crust, which has a more “cracker-like” texture.