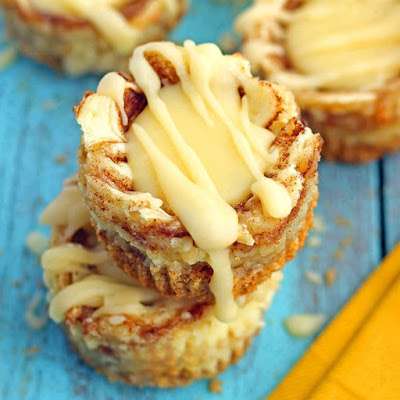 INGREDIENTS
Crust:
4 sheets of graham crackers
1 tbsp. white sugar
2 tbsp. butter, melted
Cheesecake:
1 package (8 ounces) cream cheese, at room temperature
1/2 cup white sugar
1/2 tsp. vanilla extract
2 tsp. flour
1 egg, at room temperature
Cinnamon-sugar swirl
1/2 cup butter, melted
1/2 cup brown sugar
2 tsp, flour
1 and 1/4 tsp. cinnamon
Cream cheese topping
1 and 1/2 cup powdered sugar
1/4 cup butter, at room temperature
1/2 tsp. vanilla extract
1 ounce cream cheese, at room temperature
INSTRUCTIONS
Crust
Preheat the oven to 350 degrees F. Line a regular sized muffin tin with 8 liners and fill up half of the other empty spaces with water. This ensures even baking. Spray the liners with non-stick spray. (Cinnamon sugar mixture gets sticky!)
In a food processor, pulse the graham crackers to crumbs. Stir in the sugar and melted butter. Press an even amount of graham cracker crust into the bottom of each muffin liner.
Press down the crust with a milk cap or the backside of a tablespoon measuring spoon and set aside.
Cheesecake
In a medium sized bowl, combine the softened cream
cheese and white sugar. Beat until smooth and creamy. Add in the vanilla extract, flour, and a lightly beaten egg. Beat until combined.
Cinnamon-Sugar Swirl
Combine the butter, brown sugar, flour, and cinnamon. Stir until completely combined.
Spoon half of the cheesecake filling between the 8 cups. Then place about 1 teaspoon of the cinnamon sugar swirl on top of the cheesecake. Swirl the cinnamon sugar into the cheesecake with a toothpick.
Top the rest of the cheesecake filling on top and then place drops of the cinnamon sugar swirl on top of the cheesecake.

Swirl the cinnamon sugar (again) on top of the cheesecake with a toothpick (The cheesecakes should fill the muffin liners to the brim) and bake for 20-22 minutes. The centers will still jiggle a little bit, but the edges should be a very light brown.
Remove from the oven and let cool at room temperature for 1 hour and then transfer to the fridge and let cool for at least 2 hours.
The cheesecakes may have risen in the oven and will deflate quite a bit while cooling.
Cream cheese topping
Cream together the powdered sugar, butter, vanilla extract and cream cheese.
Spoon over the cooled cheesecakes and drizzle extra cream cheese frosting on top.