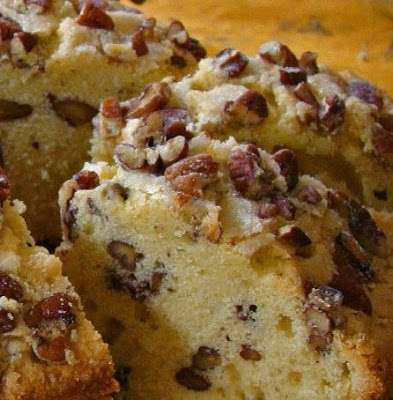 Ingredients
Batter:
1 cup pecan halves
1 tablespoon all-purpose flour
2¼ cups all-purpose flour
1 teaspoon baking powder
¼ teaspoon salt
1 cup unsalted butter, room temperature
1⅓ cups granulated sugar
5 large eggs
2 teaspoons pure vanilla extract
¼ cup sour cream
Tip: Use standard measuring cups and spoons or scales for accurate measuring.
Topping:
¼ cup pecan halves
1 tablespoon granulated sugar
Instructions
Preheat oven to 325 degrees F. Prepare one 10 inch Angel Food cake pan; lightly grease the pan with shortening and dust with flour.
Batter:
By hand, break the pecans for both the batter and the topping into ¼ inch pieces. Toast nuts, cool, and then toss with 1 tablespoon flour. Set aside.
In a medium mixing bowl, combine flour, baking powder, and salt; sift or whisk together to mix. Set aside.
In a large bowl of an electric mixer, cream the butter and sugar until light and fluffy. Tip: To cream, start by placing the butter in the bowl, with an electric mixer on medium speed begin by beating the butter about 1 minute until it is smooth and light in color. With the mixer still on medium speed, slowly add the sugar to the butter, either one tablespoon at a time, or in a very slow steady stream, taking from 4 to 8 minutes to add all of the sugar, and beating until the butter and sugar are fully incorporated and the mixture is a light, or pale yellow color, with a fluffy texture. While adding the sugar, stop the mixer occasionally to scrape the mixture off the paddle and scrape down the sides and bottom of the bowl with a rubber spatula so the mixture blends evenly.
Add eggs one at a time, beating until thoroughly mixed. Add the vanilla along with the last egg. Tip: For each egg, crack the egg into a small bowl and whisk with a fork to thoroughly break up the egg before adding to the creamed mixture. Start with the mixer on low speed so the liquid from the egg doesn’t splatter, once the egg is partially mixed increase the speed to medium. Each egg should be fully incorporated into the mixture before adding the next egg, taking about one minute to blend in each egg.
With the mixer on low speed, add about ½ of the flour mixture, mix just until the flour is almost completely blended. Scrape the bowl down, and add the sour cream, blending just until mixed. Scrape the bowl down again and then add the remaining ½ flour mixture, mix just until blended, scraping down the side of the bowl as needed.
Using a large rubber spatula, gently fold 1 cup toasted pecans into the batter.
Spoon the batter into the prepared pan and smooth the surface with the back of a large spoon.
Topping:
Sprinkle ¼ cup toasted pecans over the top of the batter, and sprinkle with granulated sugar.
Bake: Bake 55 to 65 minutes or until a long toothpick, wooden skewer, or cake tester inserted in the center comes out clean. Place pan on a wire cooling rack to cool for 10 to 15 minutes then remove cake from the pan and place the cake on the wire cooling rack to finish cooling.